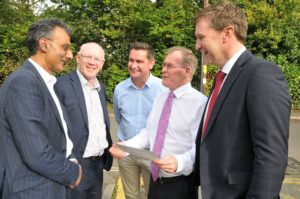 A delegation from Ireland is visiting the UK to learn about NAPC’s primary care home model and the achievements of one of the rapid test sites – Beacon Medical Group in Plymouth.

Other members of the delegation include Dr David Hanlon, the national clinical advisor and group lead for primary care from the Health Service Executive, which provides all of Ireland’s public health services and the President, Dr Emmet Kerin, Chairman, Dr Andrew Jordan; and Chief Executive of the National Association of General Practioners (NAGP) in Ireland, Mr Chris Goodey.

The visit follows the publication of the all-party Slaintecare Report in May which outlined a new 10-year vision for the future of healthcare in Ireland and a shift away from the hospital-centric system to more primary and community-based care closer to people’s homes. The NAGP welcomed the following principles that were highlighted in the report:

The primary care home – which has rapidly expanded to 191 sites across England serving eight million patients, 14 per cent of the population – is one of the new models being explored to support the change following a presentation by Dr Nav Chana, the Chair of the National Association of Primary Care (NAPC) at the Primary Care Partnership Conference in Dublin earlier this year which discussed “Defining Primary Care in the 21st Century”.

NHS England Chief Executive Simon Stevens launched the primary care home programme in the autumn of 2015.  Beacon Medical Group in Plymouth was one of 15 rapid test sites selected in December 2015.

Developed by the NAPC, the model is an innovative approach to strengthening and redesigning primary care and is featured in the Next Steps on the NHS Five Year Forward View as part of the practical delivery plans to transform primary care over the next two years.

Over the two days, the delegation will learn more about the primary care home model and its four defining characteristics, Beacon Medical Practice’s achievements and how it has moved into a psycho-social medical role including its close links with the community and how patient engagement has been integral to its success.

Dr Emmet Kerin, NAGP President said: “I am delighted to visit Beacon Medical Group alongside our UK partners, NAPC, to find out more about the pioneering primary care home model of care in England. The model has been shown to be a catalyst for better integration between health and social care professionals in primary care.

“We have been inspired by the model which we believe will help us implement the decisive shift to GP-led primary care that we, in Ireland, are all determined to deliver. This model has the potential to bring higher patient satisfaction along with a safer, more cost-effective health service. I look forward to bringing the learning home as we create a future healthcare system that our patients deserve”.

NAPC Chair Dr Nav Chana said: “We are seeing a sense of renewed energy and motivation with the roll out of the primary care home model. It is still early days, but we are already seeing a positive impact on prevention, an increase in primary care capacity and freeing up of GP time as well as a rise in staff satisfaction and retention.

“Practices that had struggled to recruit and retain staff have filled their vacancies after beginning to develop the primary care home. We know Ireland is facing similar recruitment problems and we hope this model will be another means of assisting them towards the shift to GP-led population health based care.”

Chief Operating Officer Claire Oatway at Beacon Medical Group said: “For some time we’ve been working hard with our local partners to change the local health and care system for the better for our patients. This has been challenging in the current climate and environment within which we operate but also hugely rewarding to see the energy and desire for change among so many parts of our system.

“This visit is a chance for us to really showcase and celebrate the great work that we’ve done and to share that learning with our Irish colleagues.”

Note to the Editor:

The NAGP is committed to best practice within the primary care sector and will strive to promote and protect the high standards already in place.

Beacon Medical Group is a large practice, formed by the merger of 4 individual practices, supporting approx. 40,000 patients. They’ve been through a significant change reorganising how they work and the services on offer over their first 3 years. They offer dermatology and musculoskeletal services to patients reducing the need for referral to secondary care (with inherent delay and additional cost). They have developed a mixed urgent care team with patients able to access on the day help from GP, paramedic, pharmacist or nurse practitioner. This has had a major impact on access to care with their routine wait dropping from 14 to 8 days on one site. As they’ve been able to grow, they’ve provided greater continuity of care and improved local support taking £1.1m (7%) costs out of the acute care system in their first year and saving hundreds of thousands in medication costs.